I was sent this painting by a Vietnam Vet who created this work to help out a fellow vet suffering from PTSD.

I want to thank Bob for passing this on.  I’ll be posting some of his work from time to time. 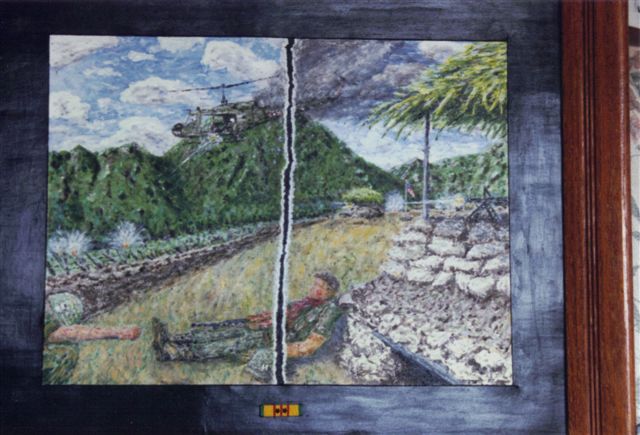 The Veterans Art Foundation has recently renewed it’s facebook and twitter accounts with a passion.  We’ve driven in more traffic and fans then we have in months.  We have over 350 followers in the Art, Veteran, and nonprofit communities.  Our twitter grade is: 88 out of 100, which is a decent start.  It measures our influence, reach, and followers ratio.

The Facebook fan page now has 163 people “liking” it.  It’s a small number to start with, but we’ve increased 150% in the last few days.   Our links have been commented and re-posted across the net.  We’ve also started a new campaign for a massive project that will bring together artists and veterans on an unheard of scale.

I’m sure there are scores of other combat veterans that have publicly humiliated themselves nationally by going on a syndicated news program[1] ranting about how in a four-day period, they caught the clap,[2] fought a white rapper and his posse, and knocked up a grandmother[3].    By doing this, I’m sure they pissed off their girlfriends and wives, like I did.

What you’re about to read, isn’t the typical war memoir, but a true[4] glimpse at an under achieving and overeducated grunt.  It’s often not pretty.  The language you will come across is coarse and often politically incorrect.    I may paraphrase some conversations and quotes.  The characters that inhabit my story vary.  Sometimes the antagonists aren’t insurgents hell bent on ruining your day, but the people you work for.  I would classify some of the people involved as heroes, others not so much.  I include myself in the latter group.

The story itself moves from comedy to tragedy, with ease.  You may read into the humor and lightheartedness as escapism. The book is more of a comedic take on the military experience, but don’t mistake it for satire.  Beneath the funny aspects lies sadness.   I don’t hate the military at all.  I miss the sense of purpose and camaraderie.  However many times I trash other people and leaders, I bring the same upon myself two-fold.  That’s probably what it truly is and how I deal with reality.  The dark side of wartime service balances the levity.  The good and bad die, get cancer, ruin their lives, are injured, and lose families.  I’m disabled, the Veterans Administration puts my percentile at 60%[5].    I’m mental, it would seem.

Currently, I am sipping a beer, wondering why I haven’t finished the paperwork for the Art Foundation I am forming.

You are about to enter a different type of culture.  I am dedicating this book to my fallen comrades, along with the veterans in my family who have passed.  I am sure if my grandpa had read this, he’d strangle me.  Here’s hoping they have a sense of humor up there.

[3] A wonderful, caring woman who I hope is doing well.

I am going to try a new tack and publish some of my memoir, which is a work in progress.  I’ll put up chapters here and there, in hopes of getting feedback.  I’ll start right now.

The memoir in question deals with my life from stepping foot in Alaska ’til now.  Army life, war, and readjustment are all covered.  The posts may not be in order.

I am working on putting together a writer (a veteran himself) and Benny Alicea (retired, Silver Star awardee).  All this time, I figured it would be easy once I found a writer.  I’m a bit naive and admit that.  Everyone, besides myself has quite a bit on their plate.

I do hope this come to fruition and we can create a worthy book about this veteran’s wartime (Fallujah and Najaf) experiences, and readjustment issues when he came home to a different world.

Here’s a link to Sgt. Alicea’s story.  He’s a close personal friend of the foundation and a poet.

Training police about veterans’ issues can be a tricky endeavor.  Police on the whole are a tough group to break through when face to face during instructions.  One has to reach out to them on a level playing field.  Cops are reserved as a group and individually.  A great deal of veterans are officers of the law and that may help.

Veterans are slowly but surely causing issues within the criminal justice system.  Domestic violence, dui’s, alcohol, and drug abuse are becoming prevalent in our generation.  No one’s immune, in our cohort.  Whether you suffer or cause suffering isn’t always the issue.  Others around you will, and ignoring it will cause it to escalate to an epidemic.

Facing a group of police is nerve wracking when leading a discussion panel and questions and answers.  In order to reach them, you must make them understand   Cops usually respond to gallows humor, but today, mine fell short.  They listened carefully, sans one aloof officer, who didn’t keep his smirks to himself.  (I may have misinterpreted his ticks though).

Chris and I taught police signs of PTSD, depression, identifying and coping mechanisms for veterans.  We also share how to deescalate potentially violent situations through empathy.  In the end, some police officers approached us with questions and complements.  One of the greatest things we’ve heard has been “this has been the greatest training I’ve ever had in X years.”  It’s flattering and means we have reached at least some level of understanding within the law enforcement community.

I grew up, hoping to be one of two things.  A cop or an Archeologist (thanks, Indiana Jones!), and these at first seemed attainable.  Arguably the archeologist one still is.  I even graduated from Northeastern University with a degree in Criminal Justice.  After failing to drift right into a police job, I joined the military.

Spending four years in the army was no cake-walk.  It also wasn’t too bad at times.  The 16 months of combat took its toll on my mental stability and anger management.  I went for disability and ended up walking away with 60%.  The choice I made of admitting my problems and seeking disability has rendered my dreams of ever becoming a cop virtually nonexistent.

I started the art foundation in response.  I’m no painter, but I love writing and film and appreciate all aspects of art.  I’ve written films, screenplays, and even shopped around a screenplay (failing, I might add) since being home.  This is my plan for the future.  (may do one of those Archeology vacations and hopefully fight off Nazis)

The problem with disability (mentally and/or physically) and admitting you have them, resounds throughout your life.  As a 60% vet, I cannot apply for police departments.  The state has the highest, at 50 percent acceptance.  Even then, I don’t think they’d allow me, with my depression and anxiety in.  These issues will affect large numbers of veterans with problems.  They have to balance their issues with job opportunities.

A large portion of combat vets seek jobs in law enforcement or the likes. Those jobs suite their needs and personality.  If they admit their issues, then they’re basically out of luck.  Finding other meaningful work, will be tough.  That’s why I hope to at least help  alleviate some stress with this foundation.  There will be thousands of disenfranchised veterans with little motivation when dreams disappear before their very eyes.  Something needs to change, whether it be laws or employment standards.  To deny veterans jobs, is a crime.

I’m not going to go over the stats, the news stories, the army’s stance, etc.   Those are already covered enough in the media and blogging world.  My best friend who survived Fallujah, Najaf, and other major campaigns, a silver star recipient, has known three people who’ve committed the act.  By way of gun and car crash.  As of this post, no one I know has killed themselves, unfortunately I don’t think that will hold.

I personally suffer from major depression, permanently brought on by wartime experience.  (50% disability for that alone)  I’ve struggled with it since I was 18, (which I found amazing the VA awarded me the disability, I was honest with them) caused by repeated blows to my head during a terrible fist fight.  I haven’t been the same.  Suicide’s always a way out I guess, but it’s the end all.  Final.  I’m fairly certain that it won’t ever be a serious thought in my head.

This ‘epidemic’ has just begun.  As the war(s) close down and soldiers filter back into the U.S. and society in general, there will be more self bloodshed.  56,000 vets died in Vietnam, during the conflict.  I’ve heard more than double that killed themselves in the ensuing years.  Those statistics will probably carry over into our conflict.

The VA, Army, and other groups have programs in place, but there’s more to be done.  Our foundation will help to alleviate some of the issues, including mine.  The most important roadblock is the stigma attached to admitting you’ve got a problem.  This is so strong it will prevent even the most self sufficient vet into backpedaling away from help.  I was basically told I was “weak” by a close army friend the other weekend, because I had issues, or at least admitted them.  It stung, but it wasn’t enough.  It’s too late, I’m seeking help.  Somehow that issue needs to be overcome and rectified, once that happens, healing can begin.

The VAF is looking for a logo for shirts, hats, posters, etc.  We will be offering a cash prize and possible future work with the company.

Veterans are highly encouraged to submit artwork, but if no one responds, we will send it the broader art world.  The prize won’t be a huge ($150) but it will be something to start off with.

This is an introduction to our nonprofit foundation.

The Veterans Art Foundation is a nonprofit company founded by disabled veterans.  It is designed to provide readjustment help, art classes, and an outlet for veterans and their families.  We have filed for 501(3)c status.  The company is in the beginning stages of fundraising.  Please check our web page for more information or contact info for our officers.