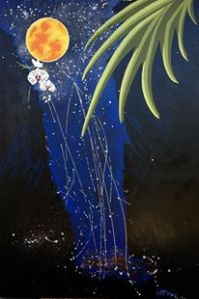 Interview With Jay Pizarro:
Listen to him talk about his painting, influences, symbolism, Vietnam and healing. I also had the opportunity to interview him.

Special Thanks to him for his time and openness!  It was great to interview him during a few weeks back. He’ll talk about his war time experiences, coming home and hope.

EXCITING NEW ANNOUNCEMENT: 1000 Words (You can tell because of the Caps Lock)

The VAF is starting a project called 1000 Words. We want you (veterans and families) to take a picture/artwork/portrait/landscape, etc. that’s yours and write about it.

It can be the story behind your work, poetry, one word 1000 times over, what inspires you, anything in that vein. Or even a letter to someone you love/miss. We’d ideally like it to be 1000 words. It can be anonymous, or public. Just email us the piece, let us know if you want your name on it.

It’s designed to broaden our understanding of art and motivations, along with self or group healing. It can be happy, sad or anything on spectrum.

I’ll start one off by posting it Wednesday. We’ll see what type of momentum and power. Perhaps sometime next year, if we have enough work, maybe we’ll publish it (with your permission of course) in a book. Let’s see where this takes us at the VAF.

The 1000 words includes the title.  You can swear, we’ll just label it NSFW.

You can submit at our Facebook Page: https://www.facebook.com/pages/Veterans-Art-Foundation/40569067611  Or email me at m.a.hawley@hotmail.com

I was invited into my friend’s middle school social studies class. I helped her lead discussions on war, veterans, and Geo Politics. The kids were wonderfully behaved.(I only had a couple of ‘did you kill anyone’ questions). They we inquisitive and intelligent.

However, the most frequently asked question dealt with the video game Black Ops. Don’t get me wrong, I love hay game and it’s quite fun. They wanted to know if war was like game.

It’s not. The screen doesn’t go red when you’re hit in real life. You fall down, screaming if you’re lucky. I’ve seen it up close, and it isn’t pretty. It ooleaves you scarred. There are no scripted battles either. In modern times, you rarely can differentiate friend from foe.

I didn’t bash the kids for the questions, if was them, I would ask the same thing. Video games are wonderful and actually good for teaching. The Army even uses them for recruitment. (Americas Army). We would come in from missions and play Halo 2 when I was over there.

It’s important not to confuse entertainment and reality. Sometimes they’re close like Saving Private Ryan, but even those films have Hollywood elements to them. War is tough, emotionally and physically. It doesn’t have a reset button or save points. We need to educate the young and ignorant and make them realize the difference.