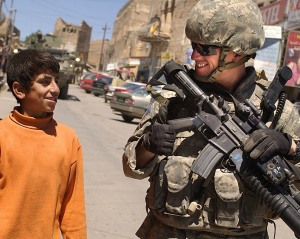 Sinjar, Iraq’s a Kurdish/Yazidi area of Northern Iraq.  The city itself is relatively small and inconsequential on the grand scheme of things.  However, the populace is friendly and warm towards Americans.

My platoon spent 4 months in a small base adjacent to the outskirts of town.  During that time, we had one IED (the first night and against another platoon) and one mortar/rocket attack.  That’s about it.  There were issues with sectarian violence.  Some of the worst bombings I’d seen occurred there.    Most of it was directed at mosques.

I worked on several victims of those attacks with my squad.  One of the worst men died after we cared for him.  It still haunts me that I may have  messed up somewhere in that mess.

Two summers ago that all changed.  Over 400 people were killed in a coordinated bombing of two small villages.  Dump trucks laden with high explosives shattered these towns.  In 2006, our unit used to patrol these villages.  They never caused us harm, but welcomed us with open arms.  The bombings were directed at the Yazidis, a 3000 year old religious sect.  Granted they have some backwards ideas, but nothing that would warrant a mass killing.

I get weepy when this place is attacked.  Just the other day, 21 people were killed at a busy eatery.  I never agreed with the initial invasion of Iraq.  However, now that we’re there, we can’t let these people suffer on our account.  They are a small minority which is in danger of losing more and more of their populace.  Sometimes, I wish the Kurds and Yazidi had their own country up north.

I will be posting pictures from time to time on Sinjar.